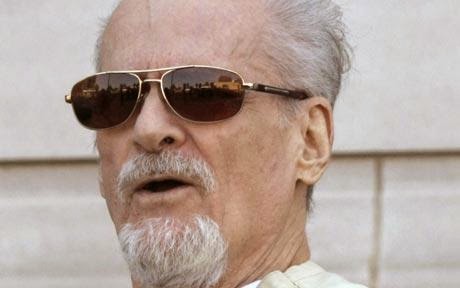 TEXARKANA, Ark. — Evangelist Tony Alamo used his stature as a self-proclaimed prophet to force underage girls into sham marriages with him, controlling his followers with their fears of eternal suffering.

But the judge who sentenced Alamo on Friday to 175 years in prison for child sexual abuse warned of another kind of justice awaiting the aging evangelist.

"Mr. Alamo, one day you will face a higher and a greater judge than me," U.S. District Judge Harry F. Barnes told the preacher. "May he have mercy on your soul."

Barnes leveled the maximum sentence against the 75-year-old, who preyed on followers' young daughters and took child "brides" as young as age 8. A jury convicted Alamo in July on a 10-count indictment accusing him of taking the girls across state lines for sex.

Alamo, who has made millions through his ministry, also must pay $250,000 in fines. He will return to court for a Jan. 13 hearing at which Barnes will determine if the five women who testified about their sexual abuse will be paid restitution. Federal prosecutors say an expert believes each one should get $2.7 million for the physical and mental abuse they endured.

Barnes said Alamo used his influence as both a father figure and a pastor to force himself upon impressionable girls who feared "the loss of their salvation."

"You are described by others who testified as a prophet of God, a person of trust, a person of supreme authority in the church," Barnes said, staring the pale preacher. "It's hard to imagine the scenario and the damage that occurred to these five young girls."

Alamo, who had muttered and cursed through his two-week trial, stood silently during the sentencing, dressed in a yellow prison uniform and a blue windbreaker. Before Barnes' ruling, Alamo told the judge: "I lean on the lord Jesus Christ."

"I'm glad I'm me and not the deceived people in the world," the evangelist said.

Alamo's defense team, which had asked for leniency due to the preacher's age and poor health, promised to appeal Barnes' ruling.

FBI agents and Arkansas State Police troopers raided Alamo's compound in nearby Fouke in September 2008. The FBI arrested Alamo five days later in Flagstaff, Ariz., charging him with violating the Mann Act, a century-old morality law originally aimed at stopping women from being sold into prostitution.

Five women, age 17 to 33, testified in July that Alamo "married" them in private ceremonies while they were minors, sometimes giving them rings. Each detailed trips beyond Arkansas' borders for Alamo's sexual gratification.

With little physical evidence, prosecutors relied on the women's stories to paint an emotional portrait of a charismatic religious leader who controlled every aspect of his subjects' lives. The women said Alamo ordered beatings or punitive fasts for minor infractions or at the whim of his paranoia.

Defense lawyers said the government targeted Alamo because it disapproves of his apocalyptic brand of Christianity. Alamo never testified at trial, but spoke to Barnes twice during the hearing Friday. He first told the judge he thought his defense team provided him adequate legal help, though he wanted them to harshly cross-examine the women to show "that the people who were testifying against me were lying."

My lawyers "did prove that I never took girls out of state to have sex with them," Alamo said.

Three of the five victims spoke in court Friday about how Alamo stole their childhoods and tore apart their families to satisfy his sexual perversions. One woman Alamo took as a child "bride" at age 8 described how she shook uncontrollably when he first molested her.

"You have the audacity to ask for mercy," the woman said, looking up from her handwritten notes to stare at Alamo. "What mercy did you show us?"

The evangelist's lawyers pleaded for a lower sentence because of his age and infirmities. They called as witnesses two followers and a doctor, who discussed how Alamo suffered from hypertension, diabetes, obesity and glaucoma. However, Dr. Samuel Berkman acknowledged under cross-examination that he examined Alamo only once in 2004, as the preacher sought an eye lift to look younger.

"There's no question he's done a lot of good," said Don Ervin, a Houston lawyer who led Alamo's defense, outlining the church's efforts to reach the poor. "He's an unusual man and an unusually great man."

Assistant U.S. Attorney Kyra Jenner said after the hearing that prosecutors would work with the federal prison system to ensure Alamo can't control his ministry and its many businesses from behind bars. At trial, one of the victims described how Alamo "married" and groped her during a prison visit.

How long Alamo remains an influence depends on whether police or former followers dismantle the ministry through lawsuits and criminal cases. The FBI declined to say Friday whether it had ongoing investigations involving the ministry.

As Alamo left the courthouse, he said he would leave to his church's future in other hands.

"The Lord is in charge," the preacher said.